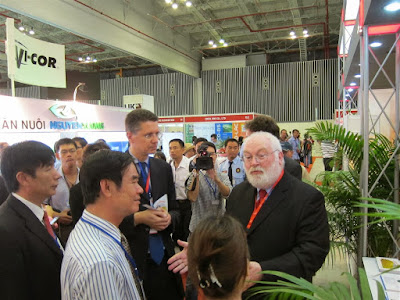 A professional career in the field of animal nutrition, oriented towards different international markets. An expertise at the service of his partners through the development of original concepts.

After a professionalized further training in the field of poultry farming, the world of business companies became the daily life of André-Yves Bourgès from 1979 onwards, whether large groups (Guyomarc'h, UFAC) or innovative SMEs (BCCG Conseil, Vitalac, Valorex) ; his experience extends to the main vital functions of what is a Company (Technical and Production, Human Development, Commercial) and to different levels of responsibility (technical specialist, manager, consultant, executive officer).

André-Yves Bourgès worked for several years in a group specialized in the nutrition of piglets, starting as a consultant, then as a commercial manager in charge of the development of the French and European markets of industrial feed manufacturers. The acquisition by the group of a company specialized in the production and marketing of additives for animal feed, has enabled André-Yves Bourgès to strengthen his technical expertise, particularly in the field of natural preservatives, and enhance its proximity to the markets of the United Kingdom, Benelux, Switzerland, the Iberian Peninsula and Italy by facilitating a European network of distributors.

Subsequently, André-Yves Bourgès worked as a development manager in an animal nutrition company whose original approach helped to make the quality of animal feed meet  requirements of health and pleasure of final consumers of eggs, milk and meat. This approach, supported by the French Bleu Blanc Coeur society and by many scientific authorities, allows a real consideration of the "food chain" :  the use of linseed rich in Omega-3 is a very interesting example of this approach, which has been taken up by several stakeholders in animal nutrition and human nutrition, both in France and abroad.

Since 2003, André-Yves Bourgès is a partner of NUTRINGREDIENTS Ltd, which has developed the NUTRI ADVANCE Concept: for ten years, André-Yves Bourgès has promoted this concept in Europe, the Middle East and South-East Asia, at the head of the company of the same name. NUTRI ADVANCE’s business continues following its acquisition by one of its shareholders in 2015..

NUTRINGREDIENTS, of which André-Yves Bourgès is now a senior consultant, has  co-developed since 2015 with French and British partners several other original concepts based on unusual raw materials and nutri-functional ingredients within 2 specialized companies,  MATERLAC Ltd and FEED INGREDIENTS Ltd.